In the brain-trainer system we split attention into two groups that are ends of a continuum: Filtering and Processing. Processing and Filtering are the two categories we use to cover what is commonly called ADHD (unless you are using Daniel Amen’s system, which seems to include everything up to psychoses in ADHD). Filtering people can’t manage the interface between the outside world and their inside world. They are easily distracted by things around them, act and speak impulsively, often have quick mood changes, often have difficulty falling asleep, move around a lot in bed and may grind their teeth. Many have allergies or asthma. As they get older, they are more likely to experience anxiety. Processing people can’t maintain their attention outside their heads and have difficulty processing language. They keep drifting away into daydreams, are very creative and intuitive but can’t process things in sequences and have difficulty with details. They often sleep very easily but have a difficult time waking up. They are more likely to wet the bed. As they get older, they are more likely to experience depression.

Filtering is related to difficulty managing the interface between the outside world and the inside world, so it shows up as distractibility (can’t control what’s coming in), impulsivity and quick emotional responses (can’t control what’s going out), generally in situations where there is a fair amount of sensory activity in the environment or where the amount of physical control required is high (e.g. stay seated at a desk for hours at a time.) Filtering clients tend to lose focus by being drawn OUT into the environment. They tend to become anxious as they get older.

Processing is related to difficulty performing sequential and/or verbal processing tasks, so it shows up in problems with reading comprehension (especially for detail), getting factual information from auditory information, problems organizing written material (writing an essay, etc.), difficulty organizing speech into a cogent presentation, performing tasks that require multiple steps and understanding hierarchies like outlining and scheduling. Creative tasks (even reading a story for fun or writing a story or poem) may be done fine (though still with little attention to detail), but organized, structured ones will be difficult. It often shows up as a client who falls asleep easily, sleeps heavily but wakes up with difficulty, not feeling rested, and it may also appear with bed-wetting. Processing clients tend to lose focus by falling INTO their own thoughts. They tend to become depressive as they get older.

Processing clients often show the “downhill” pattern on their EC EEG’s, with lots of delta and theta, less alpha and even less beta, since their brains simply can’t sustain fastwave activity for any length of time. Their T/B ratios will often be higher than expected levels in many areas of the brain, and they often “revers activate” at task, with ratios actually going UP at task (more slow-wave activity and less fast instead of the opposite), just as a person who is out of shape becomes less active when trying to perform a physically demanding task.

Both groups tend to have slow prefrontal cortex, so both can usually benefit from something like HEG which trains up the metabolic capacity in the prefrontal area more efficiently than EEG training generally does.

Filtering clients usually should be trained with SMR (appropriate to their age level) at C4 (more for sensory issues) or Cz (more for motor issues) or C3/C4, increasing SMR as a percent of the total EEG or training SMR up and theta and high-beta down.

Processing clients usually should be trained to reduce slow activity. Some people like to train beta up as well. They generally don’t have much high-beta to worry about. I sometimes try to train them to produce parietal alpha (since even that is faster than what they normally produce, and it tends to give them greater ability to stay in contact with their environments longer).

Filtering clients usually do well with longer (5 minutes) training segments, higher reward ratios (around 70-80%) and a trainer who doesn’t get too involved in the training but stays still and doesn’t chat during training. Processing clients usually do well with shorter (1-2 minutes) training segments, lower reward ratios (30-50%) and a trainer who is pretty active and doesn’t let them drift away.

Some people who have the Processing pattern may consider it a problem they want to change, but others (poets, therapists, creative types, inventors) may consider it just what they want. Ditto with Filtering. People who need to be able to multi-task and make quick decisions (some athletes and hunters, etc.) would have a great deal of trouble if their brains filtered like the rest of us.

Filtering/Control is related to the relationship between the mid-brain screening elements and the pre-frontal cortex (the thalamus/prefrontal cortex/basal ganglia/thalamus loop which mediates the interface between the individual and the environment). It is characterized by distractibility, impulsivity, emotional lability, often sleep-onset insomnia, and frequently asthma or allergies. Ability to perform cognitively is much less of a problem than with the high-theta and high-alpha folks. 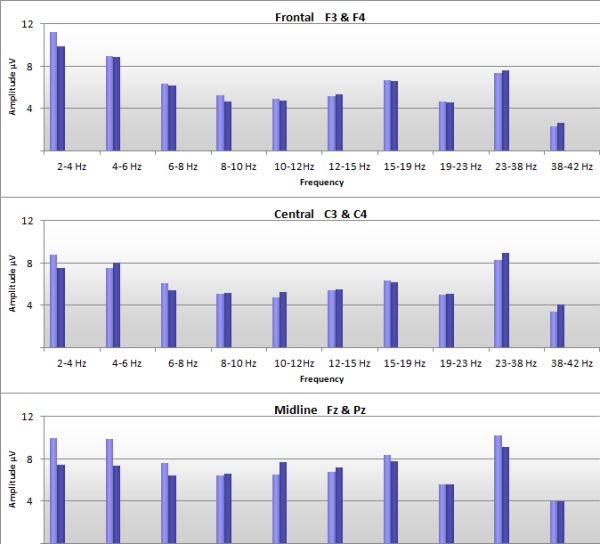 Filtering clients often show the “scoop” pattern on their eyes closed EEGs, since they have lots of slow and lots of fast activity, but they generally don’t produce middle frequencies (alpha and SMR) very well. Since the middle frequencies are related to Stillness and Presence, a Filtering client has difficulty being still and staying present (always paying attention to 3 other places).

Their theta/beta ratios will often be lower than the expected levels (you can see this information on their TQ assessments), and their alpha/theta ratios are also often low. They tend to show low levels of SMR (less than 10%) at C4 with eyes open.

HEG is always a good option, fast and easy to set up and easy for the client to do. Then training in the sensorimotor cortex (between C3 and C4) can be very helpful. If you are training C4/A2 or Cz/A2, you will usually inhibit slow (2-9 or thereabouts, depending on the EEG) and fast (19-38 Hz) and reward SMR. If you are training bipolar (e.g. C3/C4, then usually you will inhibit 2-38 to quiet the whole EEG and increase 12-15.

If you look at a power spectrum, a “downhill” pattern, with lots of delta or theta or low alpha is likely to be a Processing client with difficulty staying outside his own head, drifting off into thoughts. The Processing client is stuck in creative/intuitive thought and can’t stay in logical/rational language-based sequential processing.

You can identify the Processing Style by looking at the Theta/Beta ratio on the Reports page of the TQ Assessment. The ratio for an adult would be expected to range from 1.2 to 2.0, perhaps higher with eyes closed and dropping with eyes open and at task. Many people will be outside the range (ratio above 2.0 with eyes closed–some even with eyes open–but when presented with a task they activate (reduce their slower theta activity relative to faster beta) and are in the range of 1.2-2.0. Other people may be in the range with eyes closed and then actually increase OUT of the range (above 2.0) when given a task to do. This is called “reverse activation” and also indicates potential problems with Processing. Processing problems lead to difficulty staying focused outside your own mind–paying attention to someone speaking to you or explaining something–and often involves difficulty gathering information effectively from written or spoken material or difficulty writing or speaking in a clear organized way.

Beta training inhibits slow and trains up beta (15-18 Hz) frequencies, and it is used for Processing. Beta up/theta or thalpha or thelta down can be trained anywhere for processing.

When I work with very slow brains, I think there are several keys:

1. Design the session with multiple segments.

2. Push hard for short periods in at least some of the training.

3. Include tasks that push the brain into target states.

4. Measuring and tracking results in and out of session.

2. In the 1-minute segments (you can add some more of these, if he likes them), use a simple screen like the bargraph/threshold object and have him focus on how far below the target line he can bring the bar, or how long he can stay below it or what percent of one minute he can stay below it. This is a period of intense concentration, often with fairly active coaching (at least in the beginning) and tracking his performance. As he gets better at doing this, increase the time to 1.5 minutes, then maybe 2 minutes. These are like “wind-sprints” or “interval training” for runners.

3. Using language–outputting language–produces beta. So games like the Naming Game (3 minutes in every session until he can name 140 items in his environment in 3 minutes without a break) really tend to produce LOTS of beta. And doing it with feedback should help him stay relaxed physically while doing it. When he has completed his naming challenge, then move to the Reading Aloud Game, etc. Each of these is a short period that produces beta with tasks, is measurable and generalizes the training into the real world tasks he probably has difficulty with. There are also some good internet or computer brain development games that measure and train functional progress.

4. Track things like number of names completed in 3 minutes, number of points scored in a minute of screen control, etc. in the session. I also like doing digit span tests before and after a session (give a series of one-digit numbers spoken one second apart and have him repeat them back in order when you’ve finished; start with 4 digits or 5 digits and work up to the point where he can’t repeat them accurately). Often doing this before and after a session the client will show an improvement of 1 or 2 digits. Keep a chart on his door of things like, for example, time to complete homework. Start a stopwatch when he begins and stop it when all is completed. Graph the number of minutes (he does this) to see how this real-world task (or any other you agree to define) shows improvement.

"The best resource available anywhere and then not in bookform, but digitally, accessible everywhere instantly. My congrats establishing it for the worldwide community of NF trainers. Thank you" --Uwe Gerlach

Answers to your Questions

The Business of a Practice