BioPLAY Games from ITALLIS are the latest and most successful of several previous attempts to port old arcade games over to Flash and link them to BioExplorer (or BrainMaster or Infiniti).  The graphics are good—what you would expect from the original PacMan or Space Invaders—simple but accurate. There are 3 packages available:  two 5-packs of games, one with simple-to-moderate difficulty, the other with moderate to high.  The third pack combines the first two.  Each of the 5-packs are just under $200 and the 10 pack is $375. Most of the games are interactive, using mouse or keyboard arrow keys, though some are just for watching.

I won’t go through the list of the games, other than to mention a couple that I really enjoy using with clients: 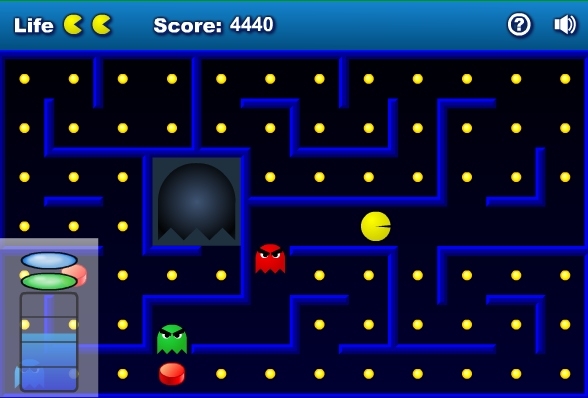 Ghost Man For any trainer/client who has gotten good and tired of the “pacman” maze that comes with BE, this is a breath of fresh air. You control the ghost man’s direction, eat the dots to gain points, try to stay away from the ghosts, eat the special dots that allow you to kill ghosts for a short time and can make it through various levels—or be wiped out early.

Space Invaders (Alien Intruders) is a great arcade game, firing your weapons at the rows of invading ships as they move back and forth across the screen, staying away from their rays and trying to shoot down the mother ships that cross the top of the screen.

The BioPLAY games also come with a pdf manual full of examples of how to implement them in BE designs.  Each game has 3 inputs, two which are on/off pass/fail types and a third which uses relative values such as percentages.  Each of these controls one of the three game elements.  For example in Space Invaders, you can set your Pass/Fail to control whether your guns fire or not.  When you are not passing the threshold, you can move your ship, but you can’t shoot anything down.  Another controls the point values of your targets and the third controls the strength of your ray, from a light one which shoots down the bottom invader you hit to a powerful beam that wipes out everything above it in the line it hits.

While you will want to spend a little time getting the hang of using these options, they are simpler to implement and seem (to me at least) to be more directly connected to performance than with the Somatic Vision games.  There are three colored ovals on each screen (for Inputs 1, 2 and 3) which go on or off to show when you are achieving your targets or not.

The BioPLAY games don’t try to compete with the high-end graphics of Somatic Vision, but having seen my 6 year-old grandson and my 22 year-old step-son spend hours playing Super Mario Brothers on a Wii, I can’t argue with the power of the old games.  They certainly are a lot cheaper to produce, and the lead time to getting them to market is significantly shorter.  They are very processor friendly, and it’s hard to imagine a computer today that would have difficulty with them.

The fact that for about the price of one of the Somatic Vision games you could get 10 BioPLAY is a plus, and with even 5-6 games that would appeal to most different clients, there are a number of sessions that could be spent trying to achieve new high scores.

In summary, if you are working with clients who are engaged by challenges (probably not anxious or obsessive folks), these games offer a broad range of options that can be added to your existing system and will give you an excellent tool to use in your sessions.