MIDI feedback, introduced by Brain-Trainer International in 1998 using WaveRider software, is a powerful tool, usable for Eyes-Closed, Eyes-Open and even Task training. It is a form of Continuous feedback, giving constant information to the brain. MIDI sounds ideally play a musical feedback, and there are default MIDI sets in each BT4BE Protocol. Some protocols with simpler targets will have a single MIDI option. Others, like Sync protocols will have multiple MIDI voices. Experimenting with these can result in a musical disaster if you don’t understand music theory, so be careful.

Obviously if you are musically trained, you will have a much better sense of how you might wish to change the MIDI sounds, but even those who are not trained can, with a bit of experimentation, find combinations that sound good to them. In most cases, though, the default choices will work fine.

For trainers who would like to be able to adjust these sounds, version 1.1 and later allow this by choosing MIDI-only feedback and clicking the “Sound configuration icon (musical notes) to the right of the feedback selection box. The following are some suggestions on changes that may be made without reducing the effectiveness of the feedback by slowing it down.

If you make changes to MIDI sounds, playing and stopping the session then clicking the “Restart” button (the circular arrow that appears in place of Play) will save the changes. These changes will replace the existing MIDI sounds for that protocol. In other words, if you change them for FRE/FRE2C, the change will be in place for all FRE2C protocols thereafter until you change it again.

In the Settings tab, the trainer can select: 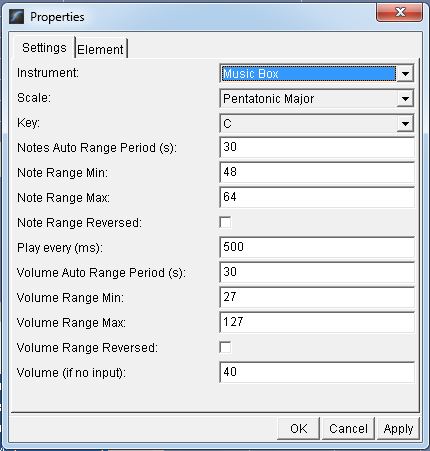 Instrument: MIDI instruments are built into the computer’s operating system, so the same instrument may sound very different on different computers. By scrolling down the list of about 200 instruments, you can test various options to see which are most agreeable.

Scale: There are 13 different sets of notes, or scales, included. These include “none”, which will include all 12 notes in an octave (like playing every black or white key on a piano) and Whole Tone, which will play only the 8 primary notes in the octave. There are also a variety of scales including Major, Minor, Pentatonic Major and Minor and some that are less familiar. Each of these will play different chord notes, so the music will sound different. If you are not trained in music, you might experiment with these and find the ones you find most enjoyable. The default Pentatonic Major is very commonly used in popular music.

Key: This allows you to change what key the music is playing in. In most cases this will make a fairly small difference in sound, but in protocols like sync, changing keys in the 3 bands can result in a very unpleasant sound. More knowledgeable musicians may experiment with complementary keys or scales.

RANGE OF NOTES
It is useful to understand the MIDI scale. Middle-C on the piano is MIDI 60. Every MIDI octave has 12 notes, so the C above Middle-C (higher tone) is 72, and the C below Middle-C (lower tone) is 48. The wider the range of notes, the more octaves, and the more likely notes are to be further apart. The lower the note range (e.g. starting at 36 instead of 60) the more bass they will be; the higher (e.g. starting at 72) the more treble they will be.

The MIDI tones may play within a limited range from lowest to highest, often seeming rather repetitive. They may be set to cover an extended range of several octaves, resulting in greater variety of sounds and jumps between notes.
Notes Auto range Period(s): The higher you set this number, the less the music will respond to changes in the level of the target frequency. If your lowest theta in the beginning was 10 microvolts, and you set this period very high, then reductions in theta below 10 will not be reflected in the music, and the brain won’t know it is doing well.
Note Range Min: This is the MIDI tone that will play when the lowest amplitude is being recorded.
Note Range Max: This is the MIDI tone that will play when the highest amplitude is being recorded.
Note Range Reversed: You may wish to have the highest MIDI tone play when the target frequency is lowest, and vice-versa. Many people prefer the treble tones to the deeper ones, so this may seem more rewarding. Checking this box will make this change.

TEMPO OF NOTES
Music may feel slower/calmer when notes are played less often; or it may seem busier and more activating when many notes play in a shorter period.

Play every (ms): A value of 1,000 in this box means that a note will play every 1 second. 250 means that 4 notes will play in a second. The lower this number, the more immediate and activating the information the brain receives. Calming protocols benefit from slower tempos. In cases where there are multiple MIDI voices, having some slower and some faster can make the sound more interesting.

VOLUME OF NOTES
As with pitch of the sound, volume can also be mapped against the brain’s performance of a challenge. As with Notes, above, the Auto Range Period allows the volume feedback to follow changes in the brain’s performance more closely. The Volume Range Minimum and Maximum (on a scale of 100) set the quietest and loudest volume levels. As with notes, these relationships can be reversed (if, for example, a client likes quieter sounds, you can set the lower volumes to play when the best brain performance is being achieved.

Volume (if no input) is the level of volume when training is not taking place—the underlying level.