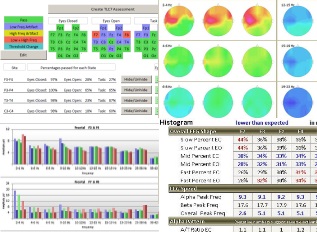 Changelog for the latest TQ7 updates. A history will be kept for future reference.

May 2, 2020 TQ7.5.9.3
One installer is now used for all software types.
Added Protocol options for Brain-Trainer for BioEra software.
Added French language to the installer and some supporting files.

June 14, 2018 Installer only
Decimal was missing in desktop icon

December 14, 2017
There are not changes in the TQ7 files, only the instruction manuals and file structure.
*With this update you will find designs, reports, sessions in the same place – Documents\BioExplorer.
*Instructional documents, drivers, etc. will be in the same place – Documents\Brain-Trainer\Help.
*Brain-Trainer tools like TQ7.5, graphing files, Subj Assess will be in Documents\Brain-Trainer. This is a change from before as they were in different places. Now they can all be found in a single location.
*In order that we may pre-load flash and audio files into designs for your convenience, flash and audio files will be in C:\Program Files (x86)\BioExplorer\Flash and C:\Program Files (x86)\BioExplorer\Media. Most users will not notice this. They were previously in C:\Program Files (x86)\BioExplorer, not inside folders.

November 1, 2017 (released December 1)
FIX: Improvements to several protocol suggestions, including low rewards in some protocols
FIX: Infiniti users- Data did not import correctly when comma was used as decimal separator.

Trainer’s Q Version TQ7.5.2
FIX: Change in Reversals page to show 15-38 Hz for Beta
FIX: Options page was suggesting FRE4C Squish with a reward.
FIX: German translation was missing in a section of the Summary Report.

November 29, 2016
FIX: There was an error when saving a file with only CRep loaded.

November 1, 2016 TQ7.4
FIX: Office update caused buttons not to work properly.
Reduced number of buttons. Printing is now done by creating pdf first, then print. Create PDF is only available on the Options and Report sheets.

March 5, 2016
FIX: Runtime error during saving on some systems

January 23, 2016
Fix: A redundant prompt to save file was removed for convenience

January 19, 2016
Fix: Executive Summary was not printing in Word for some versions of Excel.

New version: TLC7.3 January 4, 2016
Fix: Compatibility up to Windows 10 and Office 16
Improved protocol selections, including Client report issues
Client Report is now separate from the TLC7ap and can be filled out at any time. It imports automatically with assessment recording files and can be edited and imported again if needed.

August 13, 2015
Fix: Infiniti users did not have Summary Report or Save As button
More complete instructions for Portuguese language installation
TLC7 Complete Guide in Italian

1. It’s multi-lingual, so if you happen to work in Spanish, Portuguese or Italian (instead of English), you can select to have your entire assessment, training plan and summary report in those languages by clicking a button.

2. It includes a sophisticated customized executive summary report which identifies patterns found in the client’s brain and suggesting symptoms that may be correlated with those patterns. This can be saved off as a pdf file and sent to referral sources, shared with family members or clients themselves who want to know “what did the assessment show?” Some of you may also want to review it before you review the training plan to see if you want to make changes in that.

3. To protect the file (there’s a LOT of work and proprietary information in it), it will be installed directly onto ONE computer. You’ll be able to move it later if you need to (hard-drive crash, new computer, reformatting, etc.), and any updates will happen without having to go back through the installation process.

I strongly advise you to pick up a cloud-based back-up system like Drop-Box. Save your assessment files into that (or have it automatically back them up from your My Documents folder. Then, if you have multiple computers on which you record assessments, you’ll be able to go to the one that has the TLC7.2 and download the files directly from dropbox without having to put them on a pendrive or email them to yourself. Save your assessments/plans there as well, and you’ll be able to access them from any computer anywhere in the world. Never have to worry about losing them.

There is another update in the works, scheduled for release in mid-September, which will improve the protocol selections on the auto training plan (using the summary report). Version 7.3 should be the full complete version for at least a while, and you’ll be informed of it via your email address and be able to download and update without any need for further involvement on our part.