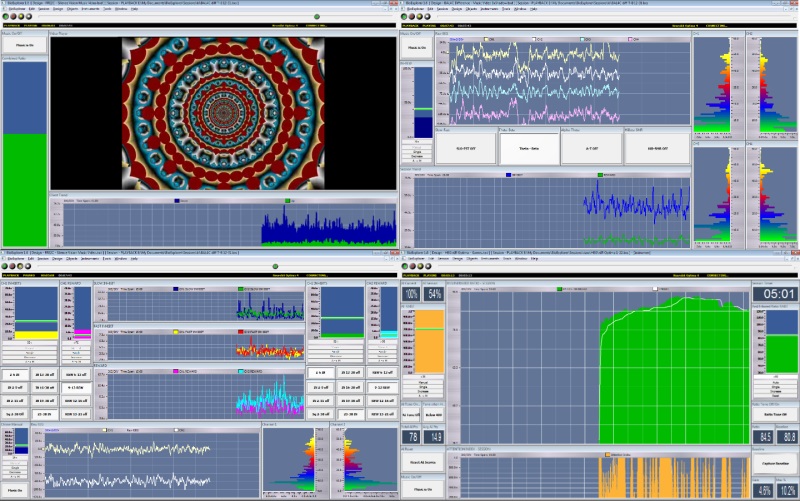 
November 7, 2019
DMN design: Adjusted filters so there is less delay


January 3, 2019
FIX: HEG nIR design (not LIFE) played tone quietly when “Tone off” button was engaged.
FRE2C button labels changed from Inh and Rew to IN and REW to correspond to training plan.
FRE2C Beta SMR channel 2 reward set at 2-6 to leave right-sided alpha uninhibited.
Labeled oscilloscopes “Raw EEG”  for consistency
Added labels to instruments in some designs for clarity

July 15, 2018
CON4C Multiband Coherence divided into two designs- up and down. Targets start on auto and switch to manual after 60 seconds.

December 14, 2017
There are not changes in the design files, only the instruction manuals and file structure.
*With this update you will find designs, reports, sessions in the same place – Documents\BioExplorer.
*Instructional documents, drivers, etc. will be in the same place – Documents\Brain-Trainer\Help.
*Brain-Trainer tools like TQ7.5, graphing files, Subj Assess will be in Documents\Brain-Trainer. This is a change from before as they were in different places. Now they can all be found in a single location.
*In order that we may pre-load flash and audio files into designs for your convenience, flash and audio files will be in C:\Program Files (x86)\BioExplorer\Flash and C:\Program Files (x86)\BioExplorer\Media. Most users will not notice this. They were previously in C:\Program Files (x86)\BioExplorer, not inside folders.

December 1, 2017
Change in README instructions only

The latest Brain-Trainer DesignsUpdate installer will place user folders in Documents (not C as before). We recommend you reinstall BioExplorer’s new version and run the Brain-Trainer installers.

May 25, 2017
Reloaded click.wav files in all designs since media files have been moved to C:\BioExplorer\Media

May 23, 2016
BAL2C Dual Bipolar: Added button option for 12-16Hz or 9-13 Hz SMR for ease of trying slower or faster SMR frequency.
FIX: All on Click feedback was not responding to BAL4C DIFF pass/fail

Changed from band ratio to summed bandpass filters for All EEG for SMR% calculation
CON2C SMR Coherence:
FIX: All on Click feedback was not responding to coherence pass/fail

•Added a set of designs that use only manual thresholds. This removes auto-thresholds so reward tones will only play when above or below the fixed threshold. This is an alternative to the usual Multiband Coherence designs.
•Decreased volume on Score object.
•Changed trend display to 5 second averaging and 10:00 time span so it is easier to see coherence trends.

February 21, 2015
BAL2C Dual Bipolar – Added Video button. Press button to turn off video when using other feedback such as DVD.

December 16, 2014
FIX: Filters had been reverted to older version. All rechecked and updated. Users should update to this.
Implemented binaural beats in FRE2C designs

July 8, 2014
FIX: Files would not extract
FRE designs- Improved audio so that one MIDI provides continuous feedback and one provides contingent. Changed the timing.
CON Multiband Coherence designs- Re-labeled buttons so it is more clear how they are to be used. (High, Low, Up, Down, Rocking)

May 30, 2014
FIX: FRE Games- BioPLAY games were stopping before session was finished.